In the icons of popular devotion there is a sacred conception of life. The section interprets the religious phenomenon in terms of a vast iconographic horizon. Trentino, which was naturally the first centre of diffusion of Catholic Counter-Reformation, is found at the crossroads of two great areas of diffusion of the sacred icons. The first, that originated at the Remondini’s printing press at Bassano del Grappa in nearby Veneto, was to make use of peddlards of nearby Tesino to spread all over Eurpe. The second, that originating in Augsburg and in other Central European towns, used to influence Trentino from the north through the Tyrol. 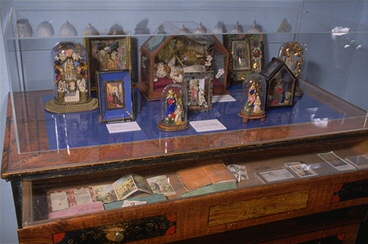